In light of the declaration of COVID-19 as pandemic by World Health Organization, the Govt. of India has notified it as a “Disaster”, under Disaster Management Act 2005 and the provision of Jharkhand Epidemic disease Act 1897 has been also imposed in the state of Jharkhand. The district of Chatra, like the rest of the country, was also put under complete lockdown.

The District Administration Chatra is making substantial efforts to mitigate and control the spread of COVID-19. Long before the lockdown, the district has started its preparedness to combat the pandemic. It started with an assessment of its available resources in the district, and sensitizing the key officials about the spread of the COVID 19 as per the Guideline shared by the Ministry of Health Family Welfare, Govt. of India. When the lockdown was declared, the district activated all its resources, and started working on the forefront to control the pandemic. The district has set up a district control room, created a procurement cell, identified locations of Panchayat level Quarantine centers and Mega Quarantine centers and created a task force to identify the influx of people from other states of the country and abroad.

Advanced preparation and setting up of a procurement cell

During the assessment of the health facilities before the lock down, the district administration realized that – Chatra has a huge dearth of resources available at its health facilities, and in order to make people stay in the dedicated quarantine centers, adequate facilities need to be created at any cost. Hence, a procurement cell was made at the district level to procure essential utilities such as Triple layer masks, N 95 Masks, hand sanitizers, gloves etc. The procurement cell is being headed by the Additional Collector, Chatra district. The Aspirational District Fellows are the part of this procurement cell and the ultimate authority of this cell resides with the Deputy Commissioner. The prime objective of this procurement cell is to manage all the procurement related activities, be it procurement of essential goods and amenities, follow up with health depts. and block level functionaries and to see that, all necessary services are made available at the district and the block level. The need assessment exercise done earlier was a game changer in this regard, as it made the work of the procurement cell very easy. Till date, nearly all the essential requirements are in satisfactory numbers and are available with the Health facilities and block officials to tackle the pandemic.

Establishing Quarantine centers at every panchayat, by providing all the necessary facilities, and to make it functional for the people who are coming from outside, was a mammoth task for the District Administration. In order to do justice to each and every block and panchayat, a task force team was created by the Deputy Commissioner, and all the senior officers were assigned 2 blocks each under their supervision. As per the addendum issued by Ministry of Home Affairs, GoI, it was also mentioned that the District Administration has to create a force of incident commandants, who will supervise the blocks under them, and provide necessary feedback to the block officials. In that context, regular follow ups were carried out in the blocks, by the incident commandants, and feedbacks regarding the necessary requirements were provided to the Procurement cell, at the district level.

In Chatra, a total of 190 Quarantine centers have been established in 152 panchayats and 2 nagar panchayats. But when there was a huge influx of returnee migrants from New Delhi, Mumbai, Surat , and all major commercially developed cities towards Bihar and Jharkhand by bus, personal vehicles and even walking, the situation was about to go out of hands. In Chatra, 3500 people reached the border of the district, within a span of 3 days. In order to tackle the situation, and to make people comfortable, without causing much harassment, the District Administration created 17 Quarantine centers at all the 3 sides of the borders touching different districts and one state border.

The district has been implementing welfare schemes but whether the fruits of these schemes were reaching the person standing at the last mile was always a matter of concern. Chatra is one of the ten districts in Jharkhand associated with income poverty and it is also regarded as ‘extremely insecure’ on the food insecurity index of the state. During this crisis situation the District Administration Chatra became particularly active regarding this issue. The Public Distribution System (PDS) shops and Bazaar Samity were made active at the district level, and the District Supply officer was made the nodal to manage the entire food distribution system.

The practice of home delivery of essential items was also started. The prime objective of the district was to not let any person suffer from hunger during this lock down phase. Although the Chief Minister’s Daal Bhaat Yojana and Didi kitchen by SHG women were working for many months in the entire state, its effectiveness was realized during this crisis time. The district opened some 42 new Daal Bhaat centers and 17 Didi Kitchen counters to provide free meals to the needy. Also dry ration is being provided to the people, who are too vulnerable and marginalized and doesn’t have a ration card 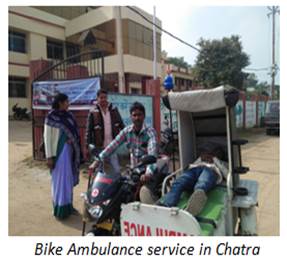 Apart from the regular welfare schemes, there were also some innovative initiatives started by the District Administration a year back, to improve the accessibility, affordability and availability of services. Two major initiatives – Arogya Kunji and Bike Ambulance service – were later adopted by the previous state govt. and budgetary allocations were meant to be done as Mukhiya Mantri Arogya Kunji Yojana and Mukhiya Mantri Bike Ambulance Yojana. Arogya kunji is a small bag given to ASHA workers, having all the basic medicines, which one can avail over the counter without any prescription. Bike Ambulance, as the name suggests is a motor bike based ambulance service to reach inaccessible/forest covered areas by any normal four wheeler ambulance. Booth these initiatives are becoming a trendsetter in the recent lock down times.

The villages are self-sufficient in terms of medicines and they don’t have to walk long distances, just to avail a simple medicine of cough and cold. This Arogya Kunji is also helping the district administration and the healthy department to track the people, who are getting sick, so that health services can reach timely. The Bike Ambulance service is also helping the frontline workers to reach hard-to-reach areas for proper monitoring during this lock down phase. The Block Officials are managing the entire Bike Ambulance service to help the Health department staff and the people who require referral facility during medical emergencies for non COVID cases.

Only a crisis produces real change. This crisis has helped the district administration to assess its existing resources, created barren buildings into quarantine centers and utilized its human resources to the maximum. During any disaster, the immediate goal is to save the lives of people to its maximum extent. In order to do so, many welfare schemes, programs, implementing agencies overlap over each other – overlapping of funds, overlapping of programs and overlapping of departments are some common themes during disaster mitigation programmes – which technically we can denote as piggybacking of schemes. In Chatra, the early planning between all departments, assessment of stocks and creation of various working committees helped the administration to manifest its energy in unison. Utilization of available resources to maximum is the key mantra during crisis, and Chatra district is following this mantra.