Since the announcement by the government of Chhattisgarh of statewide lockdown till 31st March, 2020 the district administration of Rajnandgaon has sprang into action to limit the spread of COVID – 19 in the district. The manner in which the entire COVID situation has been handled since the detection of one case in Rajnandgaon is indeed commendable. The district administration and has been quite effective in the containment of the spread so far. With Section 144 imposed in the district, the administration has been able to implement the rule on social distancing so far. The overall success of containment and addressing the COVID situation is an outcome of the efforts of many unknown and selfless workers.

Striking a balance between protection, restrictions and provision

In the fight against Covid-19 the district administration has been striking a balance between imposing restrictions in movement, in tracing and treating and in providing numerous support provisions in terms of food and shelter to the needy.

A very detailed door to door survey was conducted by various front-line workers in all towns and villages of Rajnandgaon to trace the people with travel history and those who displayed symptoms. A total of 190 tests were done and 17 people who displayed symptoms were put in quarantine centers. Till now there has been one Covid-19 positive case in the district. Since then the administration has slogged hard to stop the spread and has been able to restrict the number of COVID Positive cases in the district.

The credit primarily goes to the doctors, nurses and other frontline health workers and lab experts who are involved in screening people and attending patients. They have been working relentlessly with an agenda of early protection, early identification, early diagnosis and early isolation. They have been ably supported by the police administration who are working tirelessly to ensure that the restriction measures are ruthlessly implemented. The sanitation workers are intensively working to ensure hygiene and cleanliness and all the frontline staffs like the Mitanins and the Anganwadi workers are insuring steady supply of rations to people.

In order to reduce inconvenience amongst the people caused due to the lockdown, the district administration strived to ensure availability of rations to the general public and also to the BPL and APL card holders. The administration also decided to universalise Public Distribution System for one month to ensure no one suffers from food insecurity.

The district administration has established a Helpline number to track the workers native to Rajnandgaon who have been stranded in other states amidst lockdown and necessary help was immediately provided to them. Till date a total of 8000 workers from the district have been found to be stranded in other districts. A major percentage of these workers are stranded in states of Karnataka, Telangana, Andhra Pradesh, Maharashtra and Madhya Pradesh. A team of six members, consisting of the Aspirational District Fellow and Officials from labor department and Zila Panchayat, has been formed to continuously follow up on the calls being received from the labors on the helpline numbers.

At the end of everyday a list of these workers is sent to the respective district administration where these labourers are stranded, along with their location and the issues they are currently facing with respect to access to essentials like food and shelter. These migrant workers are once again contacted to ensure that they have received the required help from the destination administration. Many workers who have been stranded in places like Hyderabad, Indore and Bangalore were contacted have received food and groceries within 24-hours of sending the letters to their respective district administrations.

A total of 48 Relief camps have been set up by the labor and tribal department across the district to accommodate and provide food and other essential items to workers from other states like MP, Maharashtra and Telangana who have been stranded in the district. As on date some 48 relief camps are operational in the district and some 921 stranded migrant workers are provided accommodation and food in these camps.

One of the major components of the micro plan that was developed to combat COVID-19 in the district was to clearly define the responsibilities of various functionaries.

The Asha, ANM and Anganwadi workers

At field level the ASHA workers, ANMs and the Anganwadi workers are playing a pivotal role in identification and reporting of clinically suspected cases. This group of frontline workers are also creating awareness among community about disease prevention, need for home quarantine, common signs and symptoms and the need for reporting suspect cases. This awareness generation activity is undertaken by distributing fliers, pamphlets and also by interpersonal communication. Additionally, the NSS/NCC volunteers available in the district were also engaged in proper briefing on roles and responsibilities and infection, prevention and control practices. The Anganwadi workers are the real unsung heroes in this combat against Covid-19. They have ensured timely delivery of the Take Home Ration across the district. They are also providing hot cooked meals to children and mothers to avoid disruption of feeding under the nutrition programme.

In the face of this extraordinary challenge from the COVID-19 pandemic, the self-help groups of the NRLM in the district have risen to the occasion. The district had a shortfall in the Personal protection Equipment like mask and sanitizers. In order to address the shortfall, the district administration has involved the SHGs in localized manufacture of masks and sanitizers. A total of 109 SHGs have been involved in the production of masks. Till date a total of some 1,20,000 masks have been produced and distributed. The district’s municipal department have been involved in the distribution of these masks through channels like the medical and grocery stores. The masks which have been priced at Rs. 12 ensures a profit margin of Rs 5 which goes to the SHG members. Production of masks has proved to be good source of revenue generation for the members of these SHGs in this time of crisis.

The SHGs are also running community kitchens, fighting misinformation and even providing banking and financial solutions to far-flung communities. These women – many of whom escaped poverty through the SHG route and hence know what it is like to be destitute and poor – are living up to their motto of self-help and solidarity. The SHGs being closest to the ground has been helping the district administrations to identify pockets of hunger and starvation such that efforts can be made to ameliorate them. With huge numbers of informal workers losing their livelihoods during the lockdown and food supply chains getting disrupted in some areas of the district, the community kitchens are playing an important role in providing food for the hungry.

Since access to finance is critical for people to sustain themselves during the lockdown, SHGs women who also work as banking correspondents are trying to provide banking and financial solutions to the far-flung communities. Deemed as an essential service, these bank sakhis are providing doorstep banking services in every nook and corner of the district, in addition to distributing pensions and enabling the needy to access credits into their accounts. About 50% of the Bank Sakhis customers are women. The SHG federation consisting of 50 bank Sakhis have taken ICT based banking services to over 10000 households across the districts.

Past few weeks of Lockdown and battling the Pandemic has given an altogether different perspective of dealing with a crisis situation. It is not just ruthless containment that is working, but a fine balance between protection measures (like curfew, containment, tracing treatment) and supportive measures (like provision of multiple supportive services like universal PDS, community kitchen by SHGs, decentralised production of PPEs ( which also creates an option for income generation), relief camps and helpline), has emerged as the twin pillars of the district’s approach to combat the spread and the adverse effect emanating from the Covid-19 pandemic. 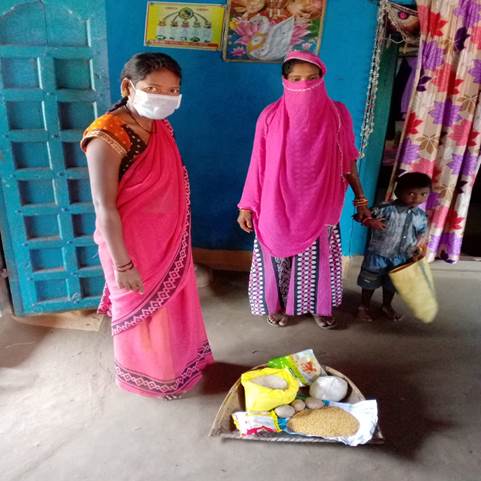 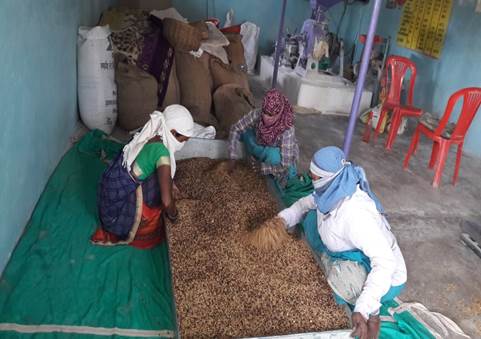 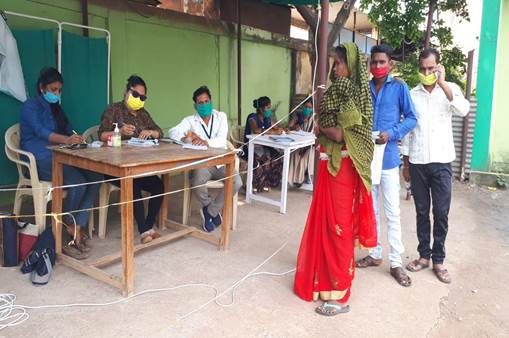 Camps arranged at CHC for OPD 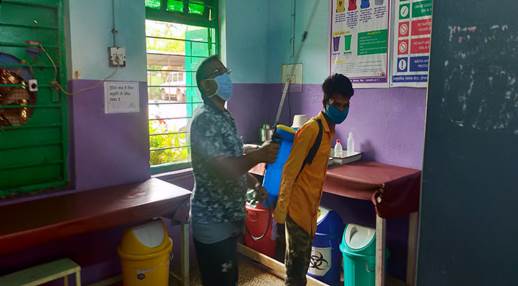 Sanitization being done at CHCs 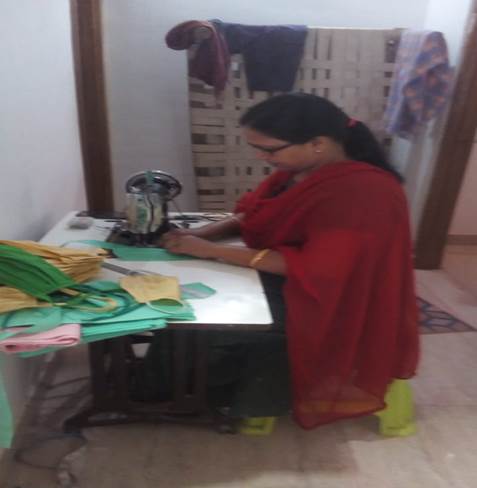 Mask production being carried out by SHGs