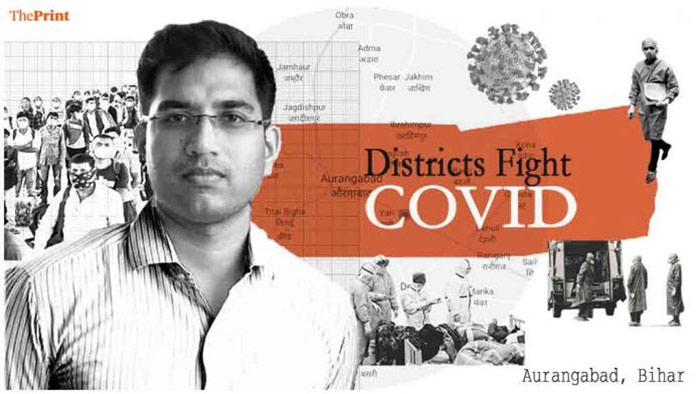 The senior officers in the Aurangabad district played the role of anchors who steered the ship through tumultuous times, while young officers provided the impetus to make things happen on the ground. The district built an effective team based on a combination of young agility and maturity to fight the Covid battle.

In the early days of the Covid-19 pandemic, the entire district and the state government had sleepless nights. From coordinating the transfer of high-risk suspects to quarantine facilities, to streamlining the sampling process to reduce the nosocomial spread of infection in hospitals, the struggle to contain this virus remains. The resolute nature of our officers remains intact, and so does their ability to work tirelessly.

In a district categorised as an Aspirational district severely affected by Left Wing Extremism, many situations require relentless multitasking and coordination for a prompt, coherent response from the government. Effective convergence required the involvement of civil society and multilateral organisations in a more fruitful way. In Bihar, such organisations offer support in varied capacities and are involved with the district administration in multiple sectors and schemes. Coordination and collaboration meant bringing in their expertise and diverse experience into government programmes, as well as assisting us in our last-mile service delivery provisions.

While senior officers at the state level ensured timely feedback and resolutions, district level officers of multiple government departments took care of implementing things. They also empowered civil society organisations to provide assistance at both the state and district level in improving monitoring, capacity building of field staff and frontline workers, and mobilisation of emergency and relief material when required.

Declaration of Covid-19 as a pandemic helped to get all these institutions to work in sync with each other. Based on the state government’s recommendations, we kept issuing advisories, leading to the creation of a number of cells to ensure speedy Covid response mechanisms in the district. However, significant difference between us and other districts was that we also built a team of consultants who assisted in strategic management of Covid-19, simultaneously working with the health department to ensure response activities were planned based on data from the field. Our public-private partnerships took place in the following domains.

One of the most important aspects of Covid-19 management was the contact tracing of all positive patients. This helped in reducing the rate of the outbreak, ensuring that any close contact of a positive patient is tracked, tested, and subsequently treated in quarantine facilities. Through frequent meetings and bottom-up feedbacks, three teams were constituted — one anchored by the district administration, another by the police, and the third by a four-member Covid Planning Group of the district, which comprised of consultants from World Health Organization, CARE India, and two fellows from Ministry of Home Affairs supported by TATA Trust (Aspirational District Fellows). The process our district followed remained effectively aligned to state government advisories, regarding in-person counselling, contact tracing by consultants which were done by means of primary and secondary interviews conducted by the district administration and police department.

This was followed by collating names of individuals based on high and low-risk propensity. All three teams had a single point of contact who would ensure that the entire process took place smoothly. There were times when the teams would work together at late hours, or early in the morning, to ensure swift tracking and testing, so that all possible positive cases could be isolated.

As lockdown 1.0 was being implemented across India, there was one top priority for all stakeholders working to fight Covid, be at the state, centre or district level — food distribution.

To ensure that food reaches the needy was our priority. With more than 70 per cent of our district’s population being agrarian and dependent on daily wages, and with around 27,000 migrant workers returning home, we assured services to migrant workers and the public through our community kitchens and collaborations with local civil society networks. Indian Red Cross society and a number of NGO’s working with Niti Aayog collaborated with district administration to ensure that food and other essential utilities were supplied to the people. NGO’s coordinated with the procurement cell of the district to ensure their needs were taken care of.

The district ensured the supply of essential items, making sure no unnecessary hoarding took place. There were numerous meetings done by the Sub-Divisional Magistrate and District Supplies Officer to ensure such malpractice doesn’t take place. While the state and central government ensured food supplies through the public distribution system, private players played a significant role in organising community kitchens, food camps and relief shelters at several locations across the district to help people at the bottom of the pyramid. Starting from the beginning of lockdown 1.0 till the end of lockdown 4.0, these camps have been organised daily by local networks of religious, non-religious, political, non-political and other civil society groups.

The Covid-19 pandemic pushed the entire country into panic and chaos, which resulted in the immediate procurement of critical Health Care equipment by all the states while markets were largely shut. This initially led to severe shortages.

In such dire conditions, partnerships with philanthropic organisations and CSR agencies assisted the district and the state government with a constant supply of critical equipment such as N-95 masks and PPE kits, which enabled timely support to our frontline workers. The support of National Thermal Power Corporation (NTPC), Shree Cement, TATA Trusts, and other local civil society players during our fight against Covid.

Soon after coronavirus began to spread, information dissemination and awareness generation had to be critical aspects of our entire strategy. We had to ensure the general public was well informed about Covid-19 and due precautions were being taken.

Considering how lack of knowledge had led to rumours and misinformation, it was an utmost priority for the state government and districts to ensure the correct information reaches the general public. For this purpose, influencers such as local political and religious leaders were roped in and encouraged to generate content and circulate it on social media platforms and messaging apps. This included aspects of social distancing, wearing masks and staying indoors. To take this resolve further, the Aurangabad district administration prepared a list of those who belonged to the high-risk population, especially elderly and pregnant women, and people with co-morbidities. Subsequently, orientation sessions were organised with Panchayati Raj Institutions (PRI members), heads of all political parties, local journalist networks and civil society institutions. This was done in addition to the several awareness programmes run by various line departments of the district.

One of the key aspects of mitigating the Covid-19 outbreak has been sample collection and subsequent testing. The Aurangabad district administration set up a sample collection centre in the district hospital, as per the Indian Council of Medical Research (ICMR) guidelines. In the initial days of the lockdown, there was very less load of sample collection and all the processes were running smoothly. Later, towards the end of lockdown 1.0 when migrant workers started making their way back to the district, there was an unprecedented increase in the number of samples collected. This increase in sampling load raised alarm bells among the medical and administrative staff who feared the risk of nosocomial spread of Corona in the district hospital. An immediate meeting of all the stakeholders was held, and the idea of a makeshift sample collection centre in a secure place was conceived. Lab technicians were trained on how to help in setting up a lab by following due processes.

As administrators and the health department began the implementation process, with the help of a unified monitoring framework we were able to considerably improve our testing rates. We improved from an average of 10 samples per day, to over 200 samples per day. The biggest achievement so far remains that while in many districts and major cities hospitals have become a source of infection spread, we have been able completely to contain the spread in hospitals. The district hospital has been free from any kind of infections, and has been serving the patients without having to worry about a viral outbreak.

Despite global and national advisories around Covid changing constantly as a district, we have been prepared to restructure existing programmes and processes when new guidelines come in.

We have learnt and are still learning to live with the virus, ensuring physical distance, but staying committed to the work before us. While convergence is gaining ground in the entire parlance of the government ecosystem, our experience has enabled us to leverage expertise and energy that has strengthened our collective fight against Covid-19.