Bokaro is a major city on the industrial map of Jharkhand, and in fact of India. Located in eastern Jharkhand bordering West Bengal, Bokaro is home to vast coal fields, along with a number of steel manufacturing plants, apart from a number of other industrial establishments. The population of about 21 lakhs is almost equally split between urban and rural areas. In 2018, Bokaro was chosen as one of the Aspirational Districts by the Government of India for the improvement of critical development indicators in health, education etc.

The purpose of this document is to inform the readers of the a few major activities that Bokaro Administration is involved in as a response to COVID-19, along with an inference on the lessons that this pandemic has taught vis-à-vis administration of the district.

Given a more industrial and hence more connected character, Bokaro is at particular risk from the pandemic. Anticipating an escalated situation, a district level meeting — immediately post the announcement of the nationwide lockdown — was called under the chairmanship of Deputy Commissioner, Bokaro. To take into confidence all the important stakeholders and to bring everyone on the same page, a district level co-ordination plan was discussed. Tackling this unprecedented public health crisis prerequisites precise coordination of all important department.

B. Components of Core COVID Management in Bokaro

While the administration is taking a multi-pronged approach to address the pandemic, this report limits to explaining only three important initiatives

In pursuance of the decision taken in the initial coordination meeting that technology must be leveraged in addressing the crisis, an Interactive Voice Response System (IVRS) was envisaged and implemented. The helpline number was widely publicized, both in print and social media for people to lodge various types of complaints, including black marketing, lacks of groceries etc. The complaint dashboard is handled by a dedicated call center made for this purpose, working round the clock. Grievance redressal is done in a decentralized fashion via field teams in all blocks and priority panchayats. At the time of this writing (14-Apr-2020), 1218 complaints have been registered on the IVRS, out of which 1205 are redressed. It is observed that the highest number of the complaints lodged are regarding delivery of essentials, including medicines and grocery to homes, followed complaints on black marketing. Given that the lockdown has been further extended till 3rd May, the IVRS system will be continued till the time the district administration sees fit.

In Bokaro urban area, platforms such as Swiggy and Zomato are engaged to deliver groceries to households. A part of the delivery charge levied by them is deposited to the district disaster relief fund. Big Bazaar, Reliance Fresh and other small retailers are engaged in home delivery of essentials. Other than this, the administration has permitted about 57 grocery stores across all the blocks of Bokaro to home-deliver groceries.

Secondly, the District Administration, under the umbrella “Smiling Bokaro” is also delivering packed vegetables at a fixed price. Commodities and vegetables are sold at controlled rates, as decided by the district administration. Hence, a decentralized approach involving both the government and private players is employed here.

Lastly, to serve the under-privileged, about 95 free Dal Bhat Kendras (DBKs), along with 3 mobile food delivery vans have been established. As of this writing (14-04-2020), pinning of all DBKs on google maps, and establishing CCTV cameras in all DBKs are ongoing. 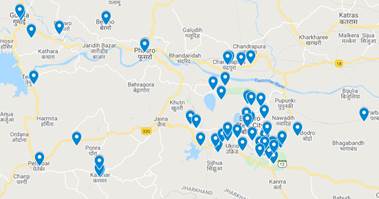 Using the Disaster Management Act, an alcohol bottling plant was seized, converting it into a hand sanitizer production unit. Given that the raw material used for making the sanitizer is the same as the one for manufacture of liquor, the plant was recalibrated for the production of sanitizer. The plant has produced around 10,000 liters of hand sanitizer, following the production protocol released by the World Health Organisation. Around 20 SHG women were employed in certain production processes, especially bottling, labeling and packing. At a time when sanitizer availability in bulk quantity was a problem, an in-house production unit came as a boon not just to Bokaro but beyond. The hand sanitizer has been supplied to: 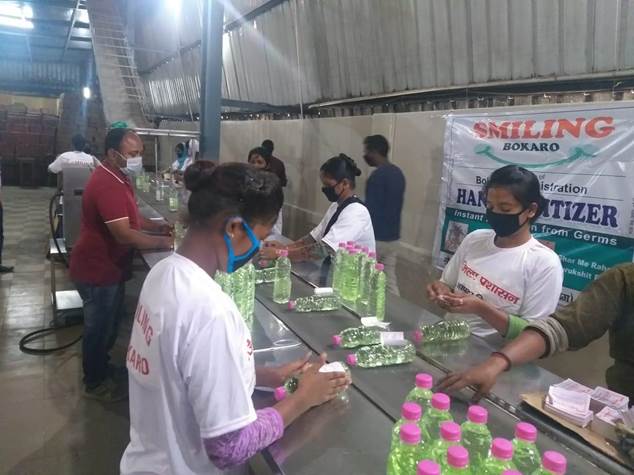 C. How has Bokaro leveraged local-available resources/expertise in tacking the pandemic?

A striking and a very welcome outcome of disaster preparedness is that the existing machinery is being strengthened. Two examples to make it concrete:

The pandemic has shown how efficient administration can become, and hopefully the lesson are carried forward in the post-pandemic phase. Going forward, a district wise pandemic micro plan may be made for better dealing of such situations in the future.