Hazaribagh is located 96 km north of Ranchi. Situated in the North Chotanagpur division, Hazaribagh district is endowed with rich mineral deposits and occupies a prominent place in the mineral resource map of Jharkhand that contributes significantly to the state’s Gross Domestic Product. The district fulfils the domestic and overseas demand with huge reserves of high-grade Coal along with other minerals such as limestone, dolomite, granite, construction material, Quartz, Felspar, stone, sand, ordinary earth etc.

COVID 19 is the infectious disease caused by the most recently discovered corona virus. The pandemic has reached every continent except Antarctica. Authorities in 211 countries and territories have reported more than 1,787,000 novel corona virus cases worldwide.

After the nation-wide lockdown was announced by the Honourable Prime Minister on 24th of March 2020, the entire nation was confused and worried about supply of essential items like fruits and vegetables, ration, dairy products, drinking water and medical emergencies services.

Inspired by the above thought, district administration Hazaribagh conceptualised the whole idea of community kitchen to address the potential food scarcity issues that might arise from the national lockdown declared on March 24th, 2020

The community kitchen was executed starting from 28th March 2020 after multiple virtual meetings with different stakeholders spanning across civil society organisations, business owners, and other major influencers in the district.

Indian Red Cross Society was the first to be on board and its secretary Tanveer Singh helped in gathering multiple stakeholders. Along with them, religious institutions also joined hands in support of the initiative of district administration. The Gurudwara community not only volunteered to provide the kitchen space but also sponsored the first day meal to around 1500 people.

The proprietors, Mr Raunak & Mr Rachit, of a very famous cafe in the city, known as Frontiers cafe, volunteered to provide the services of their cooks & serving staffs. The owner of Hemkunt rice mill Sardar M S Kalra and four other rice mill owners contributed around 50-100 bags of rice each to help the kitchen. 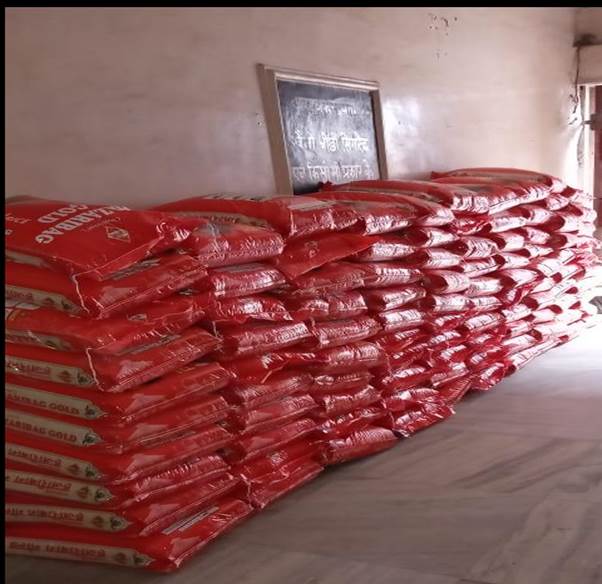 Principal St. Xaviers School, Father Roshner contributed food supply worth Rs 1 lac. Father Francis contributed ration of worth Rs 3.5 lacs. Team Munna contributed ration and food worth Rs 1 lac. Sister Britto who runs a special school for HIV affected children contributed 500 packets on behalf of Holy Cross community of dry ration for 10 days. A report of the donors is being kept by the district administration to ensure that they are thanked and rewarded for their efforts after the crisis is over.

At the community kitchen, the packaging is done by the cooks and waiters volunteered by Frontier’s café in the Gurudwara Kitchen area itself. The cooks and the waiters practise correct hygiene methods as well as social distancing and complete the packing by 1 PM. After that, the volunteers pack dry ration from 3 PM in the evening at the same place. Zila Gramin Vikas Samiti has volunteered for distribution of food at doorstep. From the pick up point, which is the Gurudwara kitchen itself, they deliver the packaged food and the already packed dry ration as needed. 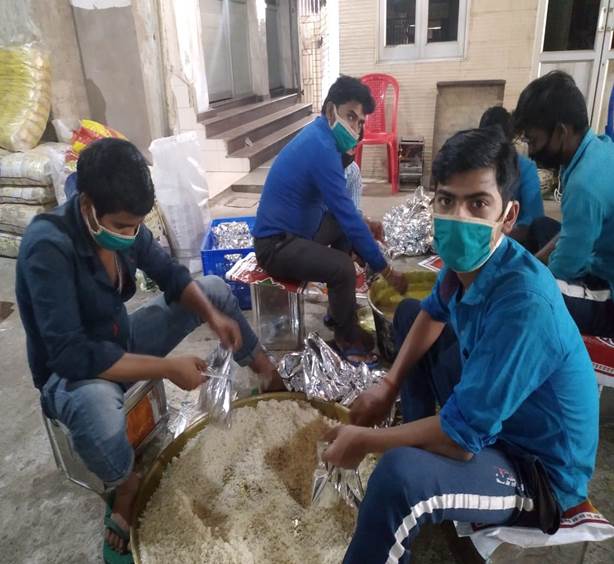 The transport facility is provided by the administration. Depending upon the need, vehicles have also been volunteered by Gram Vikas Samiti not only for delivery also for procuring ration from several donors.

The food menu changes every day at the kitchen to break the monotonous taste. The menu provides healthy and nutritious food items like Khichdi, puri-sabzi, veg pulao, puri-halwa etc. Lemon or other citrus fruits are provided on alternate days. Depending upon the need and the socio-economic status of the household, a supplementary dry ration is also provided for 2nd meal. 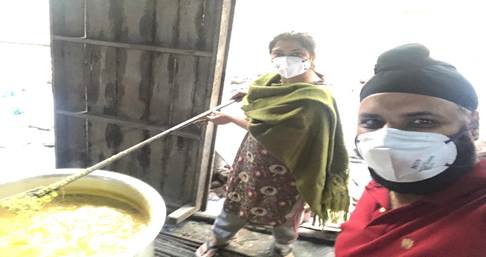 Picture: DDC Hazaribagh, Ms Vijaya Jadhav, herself helping out in the community kitchen

Apart from cooked food, a kit containing ration that may last upto one week is also provided. This includes 5kg rice, 1 kg dal, 500gm salt, 100gm turmeric, Sattu packet, 2 bathing soaps, 1 soap to wash clothes, oil and potato as per requirement. Taking the changing climate into consideration, 1 box of Glucon D has also been added in the kit. 150 bottles of water are also being distributed on a daily basis to people who do not have access to clean drinking water. By far more than 4000 packets of dry ration have been distributed. A part from this, 1500 biscuits packets are distributed everyday especially for children.

Initially most of the people being reached out through community kitchens were migrants. Slowly as and when the number of migrants reduced, most of the beneficiaries are from the marginalised and underprivileged sections of society.Dry ration is distributed not only to the needy including daily workers who are not able to afford 2nd meal, it is also being provided to around 30-40 households who do not have ration cards.

Every day 200 packets of cooked food meal is also provided separately to the district administration for directly supplying food to the needy. If there are any grievances it is reported directly through the control room or through other sources. 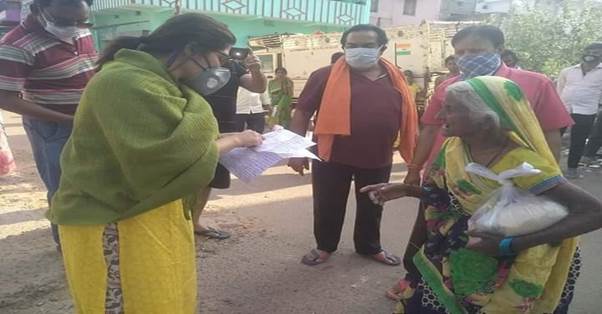 At micro-level a list has also been made at ward level, for estimating the number of households which are under-privileged but they do not have ration cards and gradually administration is trying to provide every such household with dry ration.

Food is also being provided to one of the COVID 19 patients as per his time and food schedule designed by the health professionals.

As both the cases in Hazaribagh have been from the same block i.e Vishnugarh, the whole block was completely sealed and 2500 packets of dry ration was supplied in the block on immediate basis.

What it means to have community kitchen?

Mahatma Gandhi once said, “The pain of hunger is said to be severe. If we wish to live as human beings, let us rise above even this pain.” 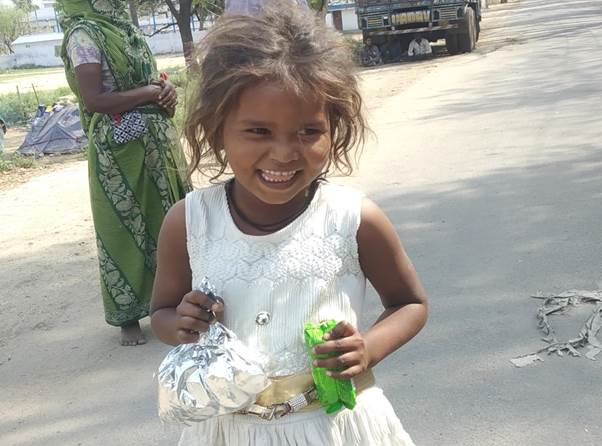 Our nation is going through a very tough time. We all have to row this boat together. India must practise its own messages of positivity, humanity and community contribution in order to survive. We as a nation need to stand united against this global crisis that has created a panic in every household.

The initiative of community kitchen has not only helped cater the hunger of the needy, it has also brought out the human side of us irrespective of our caste and religion. It has brought us together and bound us in this beautiful thread of humanity. Initially the number was around 1000. Gradually now on an average around 2000 people are being served with cooked food for one meal everyday. We are now planning to extend our services through (Meal on Wheel) where the cooked food would be delivered at the doorstep and would be served hot directly to the people.

With the aim to serve food to the every single needy person in Hazaribagh, running this community kitchen has been streamlined so that the administration aims to continue it till the last day of lockdown. Thanks to all the stakeholders including organisations on-board and individual donors who have made it possible for the administration help serve the community.