How to contain a contagion? (A case study from Aurangabad, Bihar)

COVID-19 is the infectious disease caused by the most recently discovered coronavirus. This new virus and disease were unknown before the outbreak began in Wuhan, China, in December 2019. India received its 1st case on 30th January 2020 while Bihar confirmed its 1st case on 22nd March 2020. After these initial cases tally of the infected persons in India stands at 9152 and that of Bihar is at 44. Aurangabad, which is a district from the southern part of Bihar bordering Jharkhand has not yet received any positive cases and is standing at a relatively safer position when compared to the rest of the districts in the state as well as the country.

Even before the announcement of lockdown the district magistrate sensed a need for awareness regarding COVID-19. Being a relatively novel disease, the information and so is the knowledge of the PRI and Front-Line Workers regarding the same is very limited. To tackle the same district administration has teamed up with CARE India to develop IEC material and subsequently conduct awareness generation sessions with PRI & FLW to provide them useful information regarding COVID-19.

Chhat Pooja is a major festival for Bihar, every year in 1st week of April a large gathering and procession is held at the Deo Surya Mandir and other major temples in the district which is attended by an average of 8 lakh persons from within Aurangabad, different districts in Bihar and rest of the country. Given the risk of outbreak at such gathering, the district administration called for a meeting of all elected representatives, religious leaders and associations, priests and other public representatives to convince them about risks associated and the bad image it might leave about Aurangabad as well as Bihar. All the attendees univocally agreed to cancel the gathering as well as to educate local community regarding the same to avoid facing any backlash.

As soon as the lockdown was announced by the central and state governments the district administration following the orders from the state had created various cells namely: 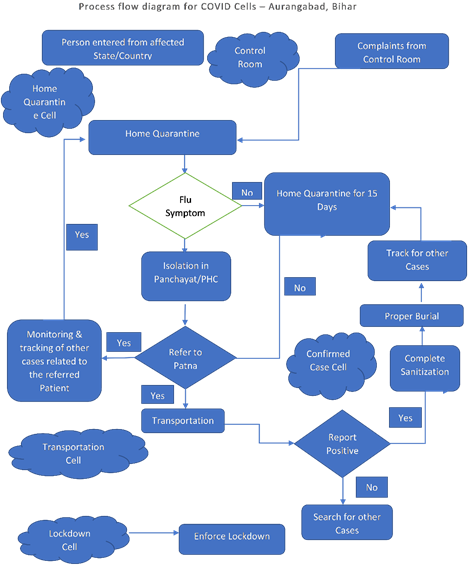 To begin with a control room was setup to ensure proper Liasoning between various cells and maintain the register of complaints and issues coming from the public regarding corona and other general issues or problems. Next to ensure the proper implementation of the lockdown and communication of the rules, regulations and other precautions to be followed during the lockdown a Lockdown Enforcement Cell was setup. A Food Grains Cell was established to ensure maintenance of enough stocks of essential food items both in the PDS as well as private distribution systems through constant monitoring and surveillance. This cell is also responsible for Ration Basket consisting of dry ration i.e. rice, pulses, oils, sugar, salt and basic spices that is being offered on-call to the needy persons. The Medical Cell In a 1st of its kind initiative across Bihar, had included Polio Task Force Teams in the rapid response teams to improve their effectiveness. The procurement cell in coordination with Jeevika has procured more than 25,000 masks that’ve been produced by the women of these SHGs and distributed among the frontline workers, patients and visitors at the quarantine camps. Through the information cell Religious Leaders and people of influence too have requested the public through social media to stay at home and maintain social distance. Through the transportation cell Bus facilities at major borders of the district had been arranged for the transportation of migrant labourers who’ve entered the district to their respective panchayats where they are placed in quarantine camps. A Shelter less Cell has setup 4 centres across the district to take care of the basic needs of the shelter less across the district.

Till date 7673 people who’ve returned into the district are being tracked daily via home visits or telephone calls to track if any symptoms arise. 129 members returning from foreign travel and 6971 domestic and internal travelers within Bihar have been identified and put under home quarantine. Another 695 members that’ve entered the district after the implementation of lockdown have been put under various quarantine camps that have been setup across the district. 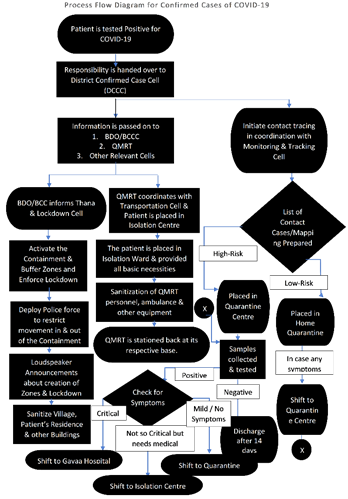 Generally during such emergencies, the efforts of NGOs, CSOs, Voluntary Organizations and the district administration often overlap, creating problems such as duplication, uneven distribution of efforts and misuse of funds. To avoid such problems Procurement Cell has been created to ensure all these parties share information about the kind of activities they’re conducting. Through this collaboration NSS, NCC, Red Cross volunteer teams have been engaged in crowded public places to ensure the maintenance of social distancing. Additionally, WHO has been working on the surveillance and closely monitoring the status of the suspect cases, testing which is being conducted and providing timely inputs on improving certain key parameters that are required for effective combating of COVID-19.

As Aurangabad was gearing up for handling any positive case through by conducting several mock drills, during these mock drills it was noticed that these teams are also needed at block and panchayat levels respectively to carry out their tasks with a quicker response and effectiveness. Immediately the district magistrate had ordered for the formation of QMRTs at all 11 blocks and RRTs at all the 204 panchayats of the district. Frontline workers (426 ANMs, 1793 ASHAs and 2327 AWWs) have been constituted in the RRTs that are responsible for conducting contact tracing of confirmed cases.

During the past few months, several reports have indicated that young and old people are at higher risk of getting infected by COVID-19. To ensure their safety the district administration has mapped all the panchayats having higher populations of children and senior citizens and subsequently planned special measures and surveillance in these panchayats to avoid contagion of the disease.

As on date Aurangabad, Bihar is safe from COVID-19 contagion, but it is also well positioned to tackle any future outbreaks. The district administration is simultaneously monitoring the economic slowdown and its effects on the general public, the vulnerable communities and is planning for the effective and immediate measures needed for an economic revival. Based on these inputs the district administration in collaboration with TADP Cell and CARE India is planning for effective lockdown relaxation strategies to avoid any future CORONA outbreaks and revival of the economic during the process.