Managing Banking at the doorstep to spreading Awareness on Covid 19; how Giridih District administration is improving access to cash.

Giridih district, lying in the Chotanagpur Plateau Division, bestowed with natural resources has been in news for many reasons including the severe Left Wing Extremism in the district. Its also considered as an Aspirational District because of the poor developmental indices. The Govt administration in recent past has brought many transformative changes in the district with improved Governance measures under the leadership of a dynamic IAS officer and Deputy Commissioner, Mr. Rahul Kumar Sinha and his team. The initiative on “Improving access to cash through door step banking” during the pandemic is inspiring. 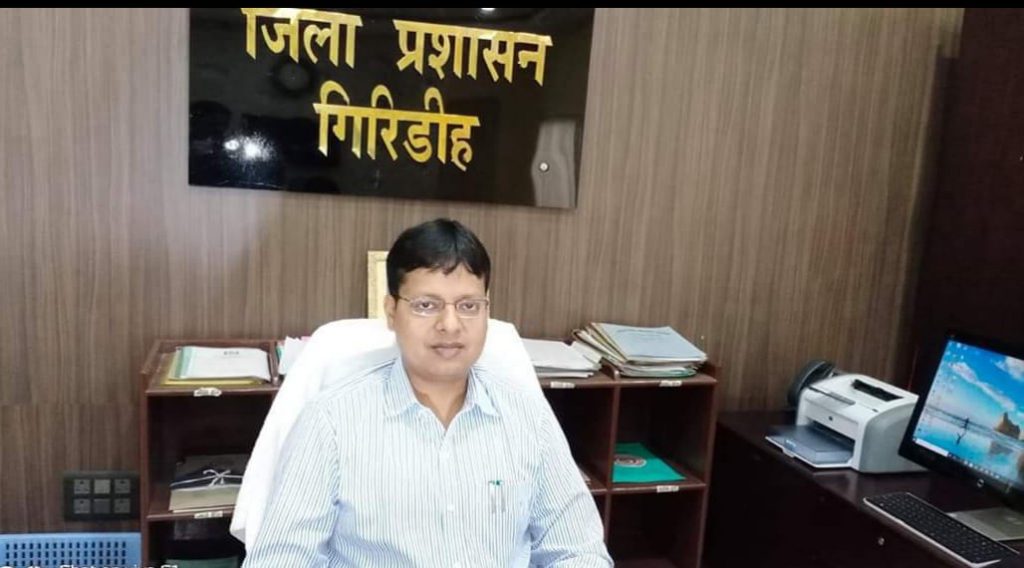 With the outbreak of the Covid 19 Pandemic, followed by the complete Lockdown, the civic life was devastated both in the Urban and Rural areas. Everyone was going through arduous. Poor, Old age and vulnerable households were among the worst hit. The district has a very poor banking coverage with only 155 bank branches catering to 25 Lakh plus population spread across 2772 villages and 358 Gram Panchayats. For meeting the daily needs, people were not able to withdraw money from the banks as the banks were opening for limited time, maintaining social distance was a challenge and more over unavailability of public transport has made the far flung rural areas inaccessible to banking. Most vulnerable people like Old age pensioners, widows, People with special needs etc were facing the burnt, as it was extremely difficult to travel to banks and withdraw cash. Further people having money in their account were unable to withdraw it.

Provision of shades outside the Bank of India, Mahesmunda branch

To reduce the misery, Hon;ble Prime Minister launched the PM Garib Kalyan Yojana and through DBT, financial assistance was credited to the bank account of beneficiaries of PM Jan Dhan Yojana, PM-KISAN, NSAP etc. In addition to this, wage payments of MGNREGS, subsidy for PM Ujjala etc were also transferred through DBT. No Cash at hand has increased the difficulty of households to pay for their day today consumptions.

Improved access to Finance by ‘Bank at your doorstep’, ‘बैंक आपके द्वार’ initiative.

To ensure that cash is made available in the rural areas, the Deputy Commissioner started an initiative named “Bank at your doorstep”, where the Banking Correspondents played crucial role in implementing the initiative. At the beginning, a three members team consisting of the Lead Bank Manager (LDM) Mr. Ravindra Kumar Sinha and Aspirational District fellows, Pankaj and Satyaki did rigorous field visit to understand the ground challenges. The team found that controlling rumors and fake news on distribution of cash is the major challenge in addition to the problem of access to cash, Rumor have spread that if the amount provided under PM Garib Kalyan Yojana is not withdrawn immediately, then the Government will pull back the money and give it to others in need. To cite an example, the rumor for PM UJJWALA scheme was that, a beneficiary is eligible for the second subsidy only after the full utilization of first subsidy. Rumors and Fake news has created panic among Women Jandhan Account Holders and other scheme beneficiaries. This lead to a huge rush in Banks despite the lockdown. 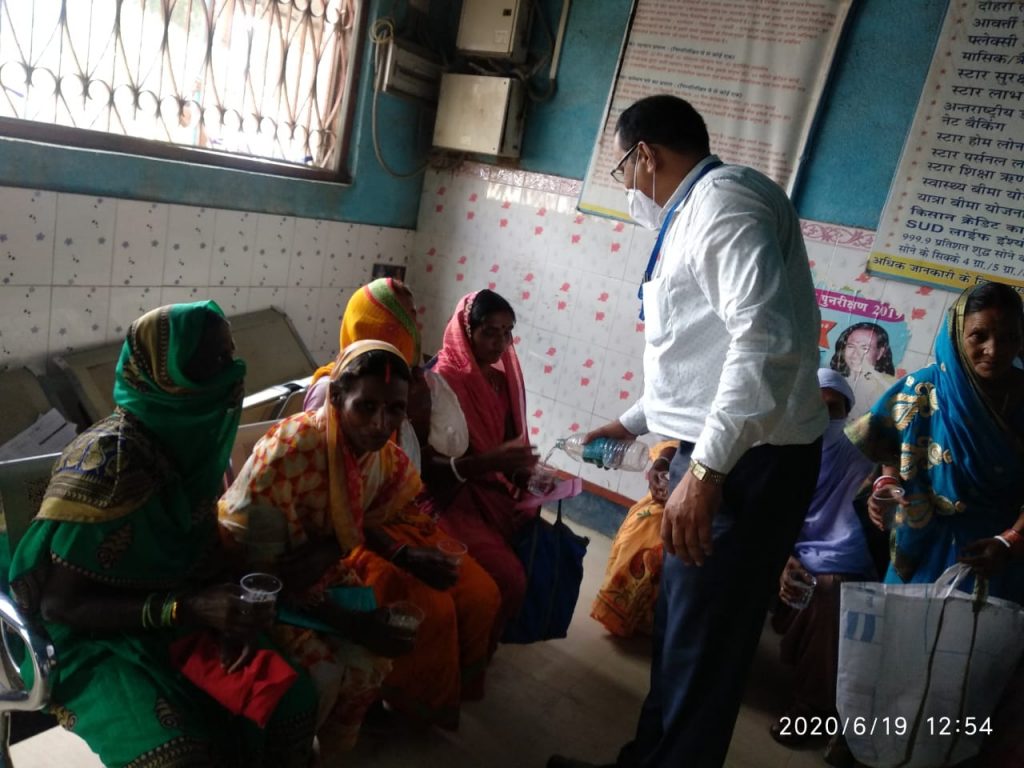 b. Banking correspondents (BC)/Banking facilitators (BFs) are placed in Grahak Seva Kendras at every 5 Kms. BCs/BFs acted like mini banks where Aadhaar Enabled account holders were paid cash on demand. The beneficiary’s biometric details were entered and the BC use to record the transaction details and pay the cash to the beneficiary.

For ensuring Social Distancing, the que in banks were earmarked with circles and for older people, chairs were provided so that they can sit and wait in the Que. Women pavilion shelters were also provided. The Deputy Commissioner instructed for placing water bell in the banks. The hot summer is unbearable and Water bell rang at the interval of every hour reminding the employees of bank to provide water to everyone standing in the queues outside the banks. To reduce the rush, token system was also used. Some people rushed to the banks to check for the account balance. A helpline calling system was put in place to update the beneficiaries on account balances. 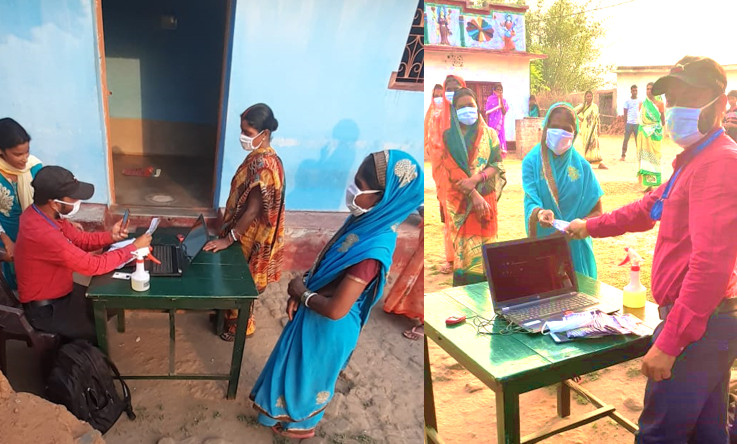 While the Banks operated in their buildings, the Banking Correspondents provided cash to beneficiaries at the Grahak Seva Kendras. BCs had to carry INR 40-50,000 from bank to the Grahak Seva Kendras in every 4-5 days interval. A police guard was attached to the BC for ensuring safety of the BC and the cash. BCs were instructed to carry their laptop, biometric device and sanitizer along with them to the doors of beneficiaries in the morning hours to dispense cash. Panchayat offices were also used by BCs to dispense the cash to beneficiaries. While implementing this initiative, women participation from SHGs played a vital role to mitigate the problem at ground. One of the women who played a key role said, “hum ghar chalate hai isliye humko pata hai paisa bachana kitna mushkil hota hai”.

The District Administrations effort in providing cash at the time of dire need is an example of Good Governance. The initiative through Bank Correspondents have so far reached out to nearly 50% of the total 5,56,948 account holders of PMJDY beneficiaries in the district. The Aspirational District Fellows played a key role in coordinating this initiative. The Success of the initiative have helped in restoring faith of people on the Government and its Governance.