Palamu, Jharkhand: Employment and Entrepreneurship Through the Koel Aajeevika Park

Recognising the value of Self Help Groups (SHGs) in employment generation, entrepreneurial development, and skill development, the Government of India has laid emphasis in enabling them to achieve their potential. When empowered, women from SHGs can act as “change vectors” to establish an upward spiral in the rural economy.

In Palamu District of Jharkhand, Aspirational District Fellows Akshaya Chauhan & Chitvan Chamadia assisted the District Administration in assessing opportunities to generate employment by engaging and empowering SHGs. One such opportunity lay in enhancing skills and employment through establishing an ‘Apparel Park’.

The District Administration, upon consulting with the Jharkhand State Livelihood Promotion Society (JSLPS), the nodal agency for implementing the National Rural Livelihood Mission in Jharkhand, located existing SHGs. It was found that many such groups exist in Chainpur block of Palamu district, and women from the SHG groups were engaged in stitching and sewing. This block became the natural location to establish the Apparel Park due to existing skills and capacity, as well as its proximity to Ranchi, allowing easier training exercises and access to large markets.

Given that these skills were pre-existent, the concept of an Apparel Park was conceived in October 2018 and implemented by August 2019. This allowed the District Administration to utilise existing skills and enable SHGs to converge and produce goods at a large scale, generating employment and igniting entrepreneurship.

The District Administration laid down and followed a six point plan to enable this intervention.

First, the Aspirational District Fellows (ADFs) visited Apparel Parks in Ranchi to understand the requirements of establishing one in Palamu.

Second, the ADFs interacted with the existing SHGs engaged in sewing and stitching. They found that they functioned independent of each-other and undertook individual small-value orders. It was also found that they did not have adequate skills to produce goods using industrial grade machines.

Third, the SHGs were combined to form a larger group of 250 women by the District Administration.

Fourth, the larger group was sent to the Apparel Park in Ranchi in smaller batches to learn the know-how of using industrial machines. The cost of Rs. 20,00,000 for training was borne by JSLPS. The entire process of training was conducted over the course of 3 months.

Sixth, the entire Apparel Park was established within 8 months. This process was regularly overseen by the District Officials and ADFs through regular inspections. Upon completion it was named the Koel Aajeevika Apparel Park.

The costs required to establish the Koel Aajeevika Apparel Park and acquire its equipment were borne by drawing capital from the Special Central Assistance Fund. The costs for the training in Ranchi were borne by the JSLPS.

Impact of the Intervention:

In evaluating the markets available for the Koel Aajeevika Apparel Park, it was found (through field surveys conducted by the ADFs) that most families in the Block did not utilise the Direct Benefit Transfer amounts for school uniforms for its intended purpose. Therefore, instead of transferring the amount to the families in the Block, the District Administration engaged the Apparel Park to create uniforms for over 7200 students, covering 67 schools in the Block. 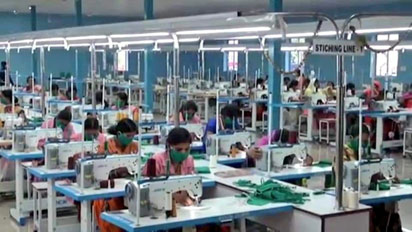 Above: The Koel Ajeevika Park, Palamu

Seeing the encouraging short-term results, the District Collector has engaged with IIT Delhi, the Nodal Body to implement the Unnat Bharat Abhiyaan (UBA) to create synergies in demand for goods. The response from the Nodal Body has also been encouraging. They have liaised with IIM Ranchi and IIFT Ranchi which have an existing demand for bedsheets and curtains, that can be met through the Apparel Park. The District Administration is also evaluating the possibility of engaging the Primary Healthcare Centres in the district to meet their regular demand for bedsheets and curtains through the Apparel Park.

Further, To meet the immediate demand for masks necessitated by the COVID-19 pandemic, the Apparel Park’s capacity and skills were also utilised.

Seeing this successful intervention, in the long-term, the Koel Aajeevika Park can be utilised to train more SHGs in the district and can be a model to set up more apparel parks across districts in India.