As the lockdown declared

Banka is located in far south east part of Bihar, which is about 250 KMs away from state capital Patna. It shares border of Jharkhand all around except the north eastern part, where it touches Bhagalpur, Jamui and Munger. This district is having one of the major Kawaria passage to Babadham, Deoghar, one of the twelve Jyotirlinga (Radiance of Lord Shiva) in India. But not just the passage the district has its own religious tourism hotspot in Mandar hills. Mainly the district has agrarian economy. Apart from agriculture, the district experiences a chunk of seasonal migration to the metro cities and other nearest bigger cities like, Asansol, Ranchi, Dhanbad and likewise. Many daily wagers from Banka also work at the adjacent districts of Godda, Pakur, Jamtara. Having close access to the state border, daily basis push and pull migration can be observed frequently. A similar flow can be seen towards the bigger town of Bhagalpur, Munger, Kiul and Patna.

Amid the COVID-19 crisis, as the country-wide lockdown was announced, an amount of uncertainty prevailed. The public transportation was at immediate halt. It affected the most to the migrant workers of the district and they started returning back to Banka – their homes. It was imperative for the district administration to respond quickly and to track every migrated individual. State Government of Bihar has come up with the quick support by providing transportation for them who were stalled at Patna and travelled to Patna from other states. District administration have had the crucial task in tracking and monitoring of other migrants also, who have taken different mode of transportation.

To tackle the mammoth task District administration has provided rapid response with meticulous strategy. The strategy has been segregated in preventive and precautionary measures. Immediate actions by issuing guidelines to create isolation centres in every panchayat was a strong step. As part of the precautions, apart from the hospitals, number of schools selected as quarantine centres have been identified and have been sanitised thoroughly. A total of 274 isolation centres have been created against the guideline issued by the Ministry. Officials have been deputed in charge of the centres. Anticipating the water crisis in approaching summer, the hand pumps of the district have been repaired and maintained by the drinking water division in mission mode. Jeevika members have started making disposable surgical mask. Fortunately, by then, the district had encountered none COVID-19 cases, so the preventive measures have been restricted to the tracking, identifying and monitoring of the people with travel history, especially it was the large number of migrant workers who were coming home. 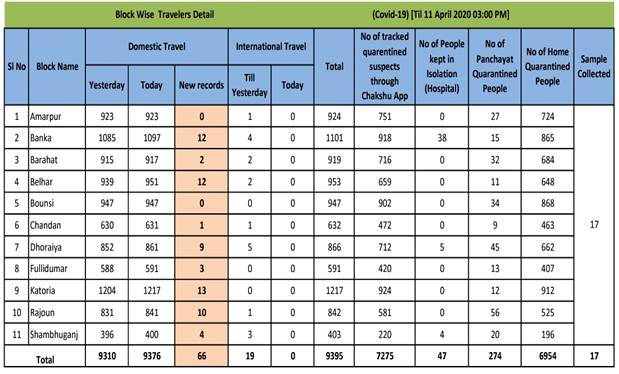 As part of, the very first challenge was; to identify and track the migratory workers. Government of Bihar had eased that task by providing the public transport to those travelling from Patna. But District administration has also established a mechanism to track other migrant workers from different routes. Bhaljore check post is one of the important entry points of the district. There, a district official along with the police check post and a mini control room has been established. This check post is maintaining a register to note the details of vehicles and passengers entering the district every day. Also a thermal screening is set up at the location. People identified with even with minor symptoms, are being identified and tracked. These mini control rooms at different check points provide the district the required shield from the community spread. In the initial phase district administration ceased borders and started collecting travel data of every individual. Thus, District administration created a bucket of information who travelled to Banka. It has created the Travel History Data Base of the travellers. Administration has set a cut-off date of 15 days before lockdown, to identify effective sample of travellers to the district. The data base has been created in a decentralised manner. From district to sub-division to block and up-to panchayat this database has been created. These sheets are regularly being monitored with the help of frontline workers – ASHA, ANM, Panchayat sewak, ward members. From the ICDS department, kits – containing rice, millets, chocolate and biscuits had been distributed to the children and mothers. Such 100-150 beneficiaries had been identified and kits distributed around the poshan shetra. Other than this manual work, District has promptly adopted the Chakshu App; which was developed by Bihar State Government within the five days of announcement of lockdown. To tackle the huge number of the migrant workers, they are being monitored through this app with their health status. The app is providing an observation period to each individual as per their travel date. Health workers are assigned to a group of identified migrant workers and being monitored by them in person. As of today total 9395 people have been monitored through this app. 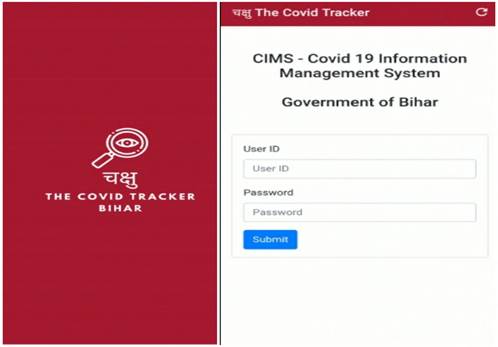 Travel information was collected from those travelled through state government’s arrangement. At their arrival in the district, they have been through temperature screening and also a normal health check-up by the district administration. A small IEC (Information, Education, and Communication) has been conducted on basic individual sanitisation and hygiene with them. People have been segregated and provided the transit arrangement as per their destination blocks and panchayats and have returned home to reunite with their family. Apart from the health check-up they were given basic ration to continue their home quarantine with food security. Almost 6954 people are in home quarantine with travel history. 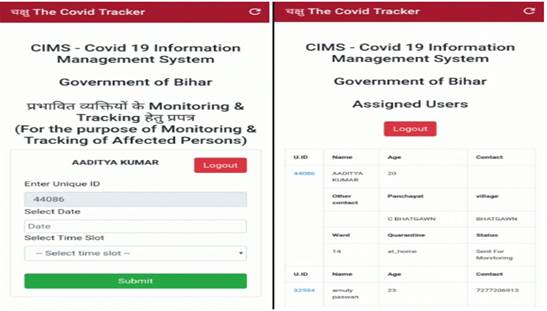 Figure 2 : Visuals inside the Chakshu Application

Working with champion of change

These herculean task is not easy unless a strong central management team is established. Under the guidance of the District management and the health department, a separate cell has been formed to look after this crisis in a bird’s eye view. These cell has deputed officers in a pyramided structure. Senior officers in responsibility of the blocks and officers at panchayat level, and then deputed person at revenue village level. Each person is responsible for the tracking and monitoring of the home quarantine cases and a daily report is being sent to the immediate senior deputed. Every day evening brief through video conferencing is being done at district magistrate level. Also simultaneously daily report of Chakshu app inputs are being analysed. But till the date of the writing this article Banka has registered no case of the COVID-19.

The effort of documenting such effort will go vain until we mention the tremendous effort of the frontline workers. In the time of such panic and pandemic, they have risked their life to reach every person in the district and visited door to door. Their relentless home visits are helping the district to map each individual with probable symptoms. Not just mechanical job of tracking and noting down, they are there to communicate more with people about do’s and don’ts during this crisis. They are the knight in shining armour to tackle the community with social, psychological support and information. They are spreading the toll free number of district control room, spreading information of rations to be distributed and also being an active channel to take care of every need of each households. In such situations they are the most crucial link to approach individual and the community at the same time.

The blocks and Channels

No matter how effective the management and the monitoring has been, still the district is trying to reach as many migrant workers as possible who are stuck in different parts of the country. Different metro cities have identified the cluster of workers and made them available the daily supply of food, shelter. But it is really difficult to identify them in remote locations. But the district is tirelessly approaching all the flags that are up from any part of the country. The District is rightly following the quote of Swami Vivekananda,

“Arise, awake and do not stop until the goal is reached.”