As per one of the reports of UNICEF in 2017, 88% of menstruating women in Bihar and Jharkhand never got access to sanitary napkins in their life. The figure itself speaks about the volume of concern, this arena seeks in. Talking about menstruation and its management is not a taboo only in conservative, but most of the so called developed societies hitherto. Simdega district of Jharkhand has paved its own way to kill the attached stigma and assuring end to end service delivery, for strengthening menstrual hygiene management practices in the society.

A three phased campaign was designed to sensitize individuals, including males and children, by spreading awareness about Menstrual Hygiene Management. The campaign was throttled, in collaboration with an UN agency WSSCC (Water Sanitation Supportive & Collaborative Council), which helped the district administration as a knowledge and logistics partner. In the first phase of the campaign 65 frontline workers from health, education, self-livelihood and social welfare departments of the district were chosen and were given training by SME coming from WSSCC, on ToT (Training for Trainers) mode. Utilizing these 65 ‘Master Trainers’, more than 3000 frontline workers were further trained on the, in the second phase. In the third phase, workshops were organized in all the 774 schools and 964 anganwadi centres of the district. Not only this, a group of 450 team leaders, who got better understanding of the subject, was given a name of ‘Garima Fauj’ and were motivated to organize a village level workshop in all the 450 villages of the district, celebrating ‘Garima Divas’, all across the district. Next in the pipeline is celebration of ‘Garima Saptah’ to reach out to each and every household of the district with the cause, by organizing workshop for all the villagers in each and every anganwadi centres of the district. The same shall be then put on year calendar of events of ‘District Social Welfare Department’ so as to assure sustainability of the project.

After covering all the villages of the district with awareness creation, next hurdle in the project plan was to assure availability of affordable, biodegradable and convenient sanitary napkins in the area. The district mobilized a group of 100 SHG women members and got them trained for stitching 100% biodegradable and chemical free sanitary napkins on themselves, using cotton clothes. The product was well welcomed by community. The administration is now looking forward to set local production unit mobilizing all the trained SHG members and promoting the brand in the name of ‘Miss Garima Sanitary Pad’. ‘Missi’ in. local dialecy means sister. Simdega now envisions to become India’s first menstrual waste free districts by eradicating the practice of usage of conventional sanitary napkins which contain plastic and chemicals, and replacing the same by its very own domestically produced solely economical napkins.

Probably, Simdega is the first district of India which ran drive on MHM issue at village level, saturating each and every village of the district. Considered as one of the most backward districts of India, Simdega indeed is leading today, in assuring not only equality but equity to women. 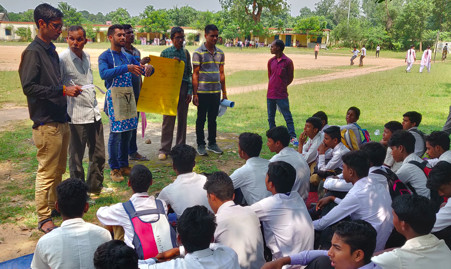 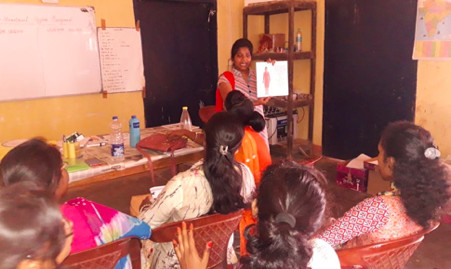 Garima Team Leaders along with the Deputy Commissioner during training session