Combating the Ill affects of Corona through protective and food support programs – Efforts of Gumla, Jharkhand

Immediately after the Janta Curfew on 22nd March the district administration in Gumla had swung into action in order to improve the preparedness in the district to contain the Coronavirus outbreak. The Aspirational District Fellows (ADFs), under the overall guidance of the district administration got involved in strategizing the support services, procurement of essential equipment and steps for containment at the district level. A War-room for COVID19 was formed on 24th of March. Since then the mandate of the COVID War Room has been to coordinate with the District Control Room, track returnee migrants, provide support services to people from the district who are left stranded in other states, manage the entire COVID control program, set-up quarantine centers at block level and district level, and set-up a dedicated COVID hospital at the Sadar Hospital,Gumla.

The pandemic was considered to be a war like situation and all the senior officials in the district were assigned a certain task force and flying squads. Daily reports of the latest measures were to be reported in this group. Initially the visits and coordination was a bit overwhelming for the officials because of the topographical challenges and there was no particular plan in place. But gradually as the ownership and roles became clear, the coordination was better.

The Coronavirus crisis was sudden, already its growth had taken an exponential path, and the remedial measures had to be taken with little lead time. The countrywide lockdown was implemented and with that job security, specifically for people from the unorganized sector, and even free movement of the general public, got curtailed. There was a general sense of panic among the public and there was massive rumor mongering. To address this the ADFs along with the District administration formed groups to address specific issues and looped in the CSOs and Youth Groups active in the district for these initiatives.

Initially the district had to ensure that there was adequate supply of Personal Protection Equipment’s (PPEs) like normal 3 layered mask, N95 mask, PPE kits, sanitizers, and gloves. The process usually followed for procurement would have made it time-consuming. However, time was of essence here. A quick solution for fund mobilization had to be found out, and the CSR funds could have played a crucial role in this scenario. The ADFs reached out to the agencies like BPCL (Bharat Petroleum Corporation Limited) and ONGC (Oil & Natural Gas Corporation) to help the district administration and was able to mobilize around Rs 25 Lakhs through CSR funding.

All medical equipment necessities have been provided mostly through CSR funds

A Helping hands initiative was launched on 30th March to provide dry ration to a group of around 10,000 needy, out-of-work people and households with old, handicapped or pregnant women with the help of Block and Panchayat level workers, JSLPS and PRADAN . This initiative aims to cater to as many people in need as possible in collaboration with various semi-government and non-government entities. The DDC (District Development Commissioner) ,Gumla was made the nodal head for this initiative. The initiative was launched initially in Gumla Block and has now spread to all the 12 blocks in the district. In most of the blocks the distribution is being done efficiently. In some places, where the communities didn’t trust the essentials being provided by the NGOs, various awareness initiatives were undertaken. Till date the awareness drive has an outreach of almost 6000 households and nearly 50,000 people in 4 blocks.

Community kitchens to provide cooked meals to the needy in the village was started in the first week of April. This was initiated by the JSLPS, through their SHGs in almost all the blocks. A public building, in close proximity to maximum number of villages, was used to cook meals two times a day and anybody who visited the Centre was fed. This decentralized initiative has really been helpful for all those who could not make it to the block distribution Centre, especially old and small children. In the initial phases, logistics was a major issue as getting essential goods delivered to far off communities was difficult, but with time the plan and strategy have been efficiently implemented. As on date some 200 community kitchens have been setup directly or indirectly in various parts of the district.

A Bhojan Rath initiative was launched by the district administration, with support from the local NGOs, on 1st April to provide cooked meals for migrant workers stranded in Gumla and to the quarantine centers in each block. It was observed that many migrants, drivers and other inter-state personnel were trapped in the district. They did not have any source of proper cooked meals as all roadside hotels were closed. As part of this initiative, the program coordinators of 3 NGOs (Jeevan, PRADAN and Awesome Health and Educational Trust) were identified as nodal agencies in charge for specific routes. In order to meet the cooking needs of such a large number of people multiple SHGs were involved. Till date the initiative has involved a total of 20 SHGs from 6 blocks. In other blocks food essentials are being distributed with the contribution of almost 200 people both in terms of efforts and resources. 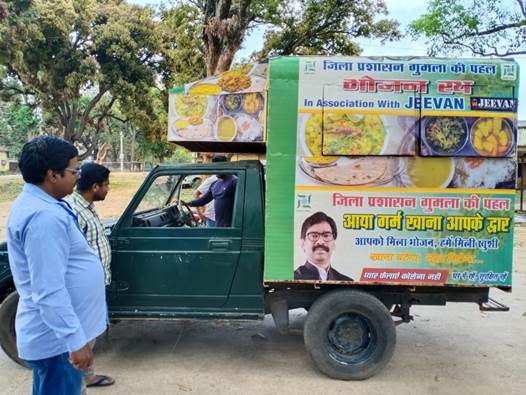 For last mile delivery of essential commodities and groceries, home delivery of groceries is being undertaken with the Awesome Health and Education Trust in the entire Gumla district. This was started immediately after the first lockdown notification as the administration wanted people to stay indoors as much as possible. Hence two local NGOs (Jeevan & Awesome Health and Education Trust) and the Gumla municipality came up with this plan of home delivery of essential goods. There were occasional glitches, but as on date the program is running smoothly. The Gumla administration along with the partner CSOs have enhanced the safety measures for the thirty delivery personnel involved in this initiative. Till date they have catered to about 500 households in Gumla town itself and every day around 50 households are getting added to the list for the entire district.

The last three weeks have been a great learning experience for all the stakeholders who decided to come together to converge their work, with the district administration taking up both the leadership and coordinating role. A host of protective measures are being undertaken to stop the spread of the deadly Covid virus. Most importantly though the district administration along with its partners are working on a mission mode to ensure that no people in the district go hungry in this time of crisis.

Combating the Ill affects of Corona through protective and food support programs – Efforts of Gumla, Jharkhand